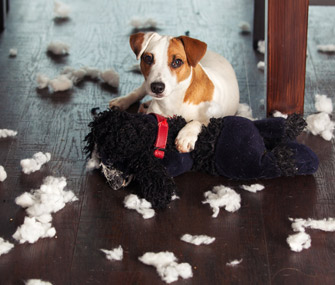 Many dogs will eat just about anything if given the opportunity.

If there’s one thing I know about dogs, it’s that they are equal-opportunity eaters. Whether it’s dinner or dish towels, rocks or
rawhides, there’s likely a
dog out there who will down it. We’ve all seen the X-rays: Dogs have swallowed rubber ducks,
underwear, knives, light bulbs, baited hooks, skewers of meat (yes, skewer and all) — I could go on and on.

What’ll He Eat Next?

That doggone urge to
chew and swallow pretty much anything in the hope that it might be tasty is the cause of many a visit to the veterinarian. Some foreign bodies — as they’re known in vetspeak — pass through the canine gastrointestinal tract unnoticed (unless you happen to spot them when they emerge). But when they get stuck, they can cause big problems.

Especially dangerous items include wooden skewers from corndogs or shish kabobs, which can perforate the stomach or intestinal wall, and linear objects such as string or thread. If you see string or thread dangling from your dog’s rear, never try to pull it out; you could damage his body tissues.

Small objects, in large enough quantities, are a problem, too. My colleague John Berg, DVM, a surgical specialist at Cummings School of Veterinary Medicine at Tufts University, recalls a dog who had swallowed about 1,500 decorative stones. They filled the dog’s stomach, part of the esophagus and the upper small intestine!

Signs of an Obstruction

An object that makes it all the way to the large intestine usually passes on its own, but obstructions can occur in the esophagus, stomach and small intestine.
Vomiting and regurgitation are the first clues that your dog may have an obstruction.

In case you didn’t know,
vomiting and regurgitation are two different things.
Vomiting involves abdominal heaving and may suggest that the stomach or small intestine is obstructed. Regurgitation, on the other hand, is when food comes right back up after the dog tries to swallow it. That’s usually what happens when a foreign body obstructs the esophagus (the tube that carries food from the mouth to the stomach).