Home Pets Cats Why Does My Cat… Eat Mice? 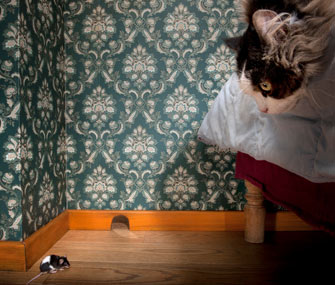 Does your cat chase after and eat mice? You can thank (or blame) your cat’s wild cousin, the African wildcat, for this behavior.

Cat owners often ask me why their cat insists on eating mice, especially when there is a perfectly good bowl of commercial cat food available to her. The answer is in your cat’s biology, ancestry and hard-wiring.

Less than 100 years ago, domestic cats were largely outdoor animals. People kept cats for pest control because cats tended to be excellent hunters. One only has to observe the behavior of the domestic cat’s closest wild cousins, the African wildcat, to see this hunting behavior in action. African wildcats are nocturnal animals and hunt mainly at night. Their hearing is so precise that they can often locate their prey by auditory cues alone. African wildcats hunt mostly mice, rats, birds, small reptiles and insects. They rarely drink water — instead, they get their moisture from the prey that they consume.

Cats also consume prey to get taurine, an essential amino acid. Unlike most other animals, cats do not make enough taurine, so they must consume it in their diet. Meat is the only thing that has enough taurine in it to meet the demands of a cat’s body, which makes cats something called an obligate carnivore. Commercial cat foods are all fortified with taurine.

Domestic cats behave in largely the same way, though human protection has emboldened them and afforded the ability to hunt both day and night. They are generally born hunters: Even at 6 weeks of age, kittens will demonstrate pouncing behavior on their food. Hunting is a natural survival instinct for cats. Cats typically hunt by stealth, approaching their prey slowly and with caution, crawling forward on their bellies until they pounce.

Domestic cats that are largely indoor hunt less than outdoor cats because they don’t have access to mice. In the wild, feral kittens are taught how to kill prey by their mothers. Domestic cats often fail to learn this skill, which is why you will see them “playing” with anything they catch, or they may bring the mouse to you to kill because they don’t know how — some cat owners call this “bringing an offering.”

So yes, it is totally normal that your favorite feline hunts a mouse and eats it. Even though you might think it’s gross, your cat probably thinks it’s normal and more than that, it’s fun! Hunting is an innate behavior in felines, and it is important that they get to exercise this ability, even if they are just “hunting” cat toys or feathered fishing poles. If your cat goes outdoors or hunts, it is important to deworm him at least twice a year, as rodents are known to carry intestinal parasites that can infect cats and humans.