April 25, 2017: We’ve scoured the Web to find the best and most compelling animal stories, videos and photos. And it’s all right here. 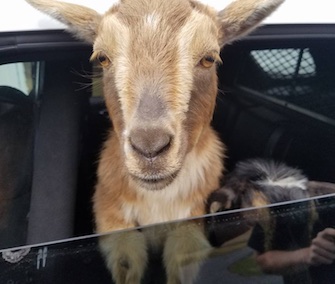 One of the pygmy goats picked up by police in Maine peeks his head out of the patrol care window.

Lost Goats Picked Up By Police

Two pygmy goats were taken into custody by the Belfast, Maine, police on Sunday — and spent the morning riding around in the back of a patrol car. “Got goats? We do, and they do not belong to us. We had these two little ‘kids’ turn up on High Street near the parking lot for the rail trail,” the department said in a Facebook post Sunday morning. “They are currently riding around with Sgt. Fitzpatrick, serenading him in goat music. Though he is thankful for the company on this cool Sunday morning, he would gladly return them to their owners. He is running out of vegetables to feed them.” Just a couple of hours later, the police said the kids were identified as Louis and Mowgli, and safely returned to their owner. “Louis and Mowgli enjoyed their day trip with Sgt. Fitzpatrick but alas, all good things come to an end. Perhaps in the next budget year we can inquire as to getting some patrol goats,” the department said in a Facebook update. — Read it at UPI

Eaglet Rescued and Returned to Nest

Last week, viewers of the live cam on the National Arboretum nest belonging to bald eagle couple Mr. President and The First Lady noticed that 3-week-old eaglet DC4 had become perilously lodged in a hole on the outside edge of the nest. When it was clear that the baby couldn’t free itself after a considerable period of time, experts with the American Eagle Foundation and the U.S. Fish and Wildlife Service made the decision to carefully intervene. The eaglet was freed and removed from the nest so it could be examined by veterinarians. DC4 was returned to its home in less than 24 hours and was welcomed back by its parents and sibling. “We could all clearly see how much the eaglet was struggling and how human intervention might make the difference between life and death,” said AEF president Al Cecere. “We had the power in our hands to help, so that’s what we did.” — Read it from the American Eagle Foundation

Two adorable North American otter pups were born on Feb. 23 to mom Charlotte and dad Benny at Chicago’s Brookfield Zoo, officials announced last week. The brother and sister pups will remain behind the scenes for a bit longer as they bond with their mom and learn how to swim. They are expected to make their public debut later this month. — See photos at the Chicago Sun Times 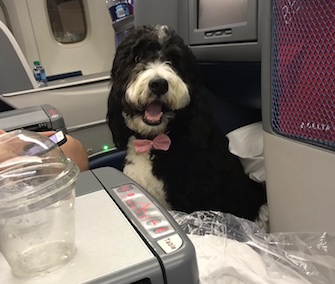 Charlie, a Bernese Mountain Dog and Poodle mix, caused a stir on Twitter after she was seated next to NBC pundit Mark Halperin on a Delta flight.

NBC political analyst Mark Halperin created a bit of a feud on Saturday when he Tweeted a photo of a cute, bow-tie-wearing dog who was seated next to him as he boarded a flight, with the caption, “Seriously, @delta??!?” As Halperin started to get backlash from dog lovers, he backpedaled, saying his point was that it was a long flight and the airline seated the dog apart from his owner. “We were abt to take off on redeye. Dog was cute. I was sharing pix & expressing surprise owner/dog hadn’t been put 2gether.No time for essay,” he said in part of a series of Tweets that followed. However, the Bernedoodle’s owner, Delta flight attendant Anthony Pisano, said the dog was only seated with him next to Halperin at takeoff, and Halperin refused to sit next to the dog. Still, Pisano made it clear there are no lingering hard feelings when he Tweeted a photo of Charlie holding a message for the TV personality: “Dearest Mark, It was a pleasure meeting you, too! Warmest regards, Charlie.” — Read it at the Observer

When Molly Lichtenwalner started looking for a companion to help her cope with her anxiety, she decided she wanted to find a special needs animal who was considered less adoptable. That’s when she found a sweet white cat who had lost both of his ears due to a condition called Otitis externa, which his previous owners left untreated. The kitty had been named Otitis after his ordeal. “He has been nothing but amazing. He immediately adjusted to his new home with me and he truly saved me from my own anxiety. He loves to play and snuggle, and nothing is better than coming home to him and experiencing true unconditional animal love,” Lichtenwalner said. And the kitty has become a star on Instagram, with more than 17,000 people following his adventures. — Read it at People Pets