Feb. 24,
2017: We’ve scoured the Web to find the best and most compelling animal
stories, videos and photos. And it’s all right here. 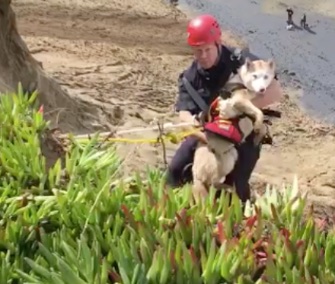 San Francisco firefighters came to the rescue of a dog who fell over a cliff.

A crew of
16 San Francisco firefighters came to the rescue of a
dog who tumbled over a ledge and down a steep cliff in the Golden Gate National Recreation area on Wednesday. The dog got stuck on a ledge after the fall. The crew dropped ropes down the cliffside and lowered one firefighter down to get the
dog. The firefighter and dog were then carefully pulled back up the embankment in a dramatic scene that was captured on video and
shared on Twitter by the fire department. The dog was in an offleash area, but a spokesman for the San Francisco Fire Department recommends “animals need to be within range for verbal commands, and people need to be responsible and keep their animals away from the Cliffside.” However, he said the dog sitter who was with the pooch at the time did the right thing by calling for help instead of attempting to rescue the dog on his own. — Read it at
SF Gate

Study: Cat Owners Not at Risk for Psychosis

Past studies have found that kids who grow up with
cats are at a higher risk for mental health issues linked to a parasite cats are known to carry. But a new study has good news for cat owners. “There is no evidence that cats pose a risk to children’s mental health,” said study lead author Francesca Solmi of University College London. For the new study, researchers analyzed data from nearly 5,000 kids born in England between 1991 and 1992, and followed them until they were 18. Overall, there was no link between cat ownership and symptoms of psychosis at ages 13 or 18. “Previous studies reporting links between cat ownership and psychosis simply failed to adequately control for other possible explanations” for the link, Solmi said. The study was published in the journal
Psychological Medicine. — Read it at
Live Science

Giraffe Calf Gets Her Name at Maryland Zoo

Visitors at the
Maryland Zoo have gotten their first glimpse of a female reticulated giraffe born on Feb. 6 to 4-year-old mom, Juma, and 11-year-old dad, Caesar. After a public vote, the
zoo revealed Thursday that the baby has been
named Willow. “Juma is an amazing mother! Her instincts are on target,” said Erin Cantwell, mammal collection manager. “She is very attentive and has been very patient with the calf as she learns to nurse. Mother and calf are bonding well and appear to be settling into their new routine with ease. All the other giraffes are curious about this new addition — it’s fun to watch them watching the calf.” — See photos at
Zooborns 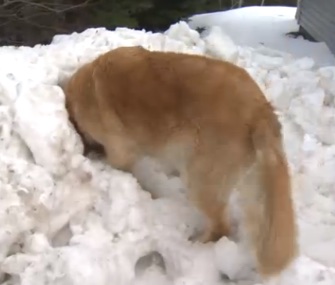 Zoose, a 5-year-old Golden Retriever, helped dig his owner out of a tight spot in Nova Scotia.

Steve Bayers, his son and his son’s friend were inside a snow fort they built in Bayers’ Nova Scotia yard on Saturday when it collapsed on them, trapping them under the heavy snow. “I knew it was very serious when my arms were pinned underneath me and my leg, my heel was into my back and my foot was twisted up and I couldn’t get any of my limbs free,” Bayers said. That’s when a four-legged hero came to their rescue. Zoose, Bayers’ 5-year-old
Golden Retriever, dug through the snow and started to pull on Bayers’ jacket to help him break free. Once he was out, he was able to shovel the boys out. Bayers suffered a broken bone in his leg, but knew things could have been much worse if it wasn’t for Zoose’s quick response. — Read it at
People Pets

Must-See Reality TV: “Keeping Up With the Kattarshians”

“Keeping Up With the Kardashians” may be fascinating reality TV, but it’s nothing compared to its adorable and even cattier spinoff, “Keeping Up With the Kattarshians.” The cast of kittens on Iceland’s new reality show, Guðni, Ronja, Bríet, and Stubbur, were discovered at a local animal shelter. They’re now living in the lap of luxury in a fully furnished
cat house with hidden cameras that
live-stream them adorably sleeping in tiny bunk beds and sitting in little chairs. The show has been educating the public in Iceland on animal adoption. The four original kittens have already been adopted and will soon be leaving the home. But not to worry — four new kitties will be moving in. — Read it at
Time.com