Feb. 2,
2017: We’ve scoured the Web to find the best and most compelling animal
stories, videos and photos. And it’s all right here. 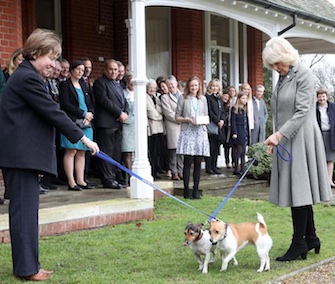 Camilla, Duchess of Cornwall, visited a U.K. animal shelter with her own two rescue pups.

Camilla Visits Shelter With Her Pups

The animals at England’s
Battersea Dogs and Cats Home had a visit from royalty on Wednesday.
Camilla, Duchess of Cornwall, brought her own two rescued Jack Russell Terriers with her to tour the facility and thank the staff and volunteers for their work. Camilla, who’s been married to Prince Charles since 2005, adopted Beth in 2011 and Bluebell, who was then just 4 months old, in 2012. Her Royal Highness was announced as the charity’s new royal patron, taking over the role from her mother-in-law, Queen Elizabeth II. “I want to thank the walkers, staff and volunteers who do such a wonderful job,” she said during her visit to Battersea’s Old Windsor location. — Read it at
People Pets

After two days on the lam, 7-year-old bobcat Ollie is safely back in her enclosure at Washington’s
National Zoo. Just after the
zoo had given up looking for her, saying they had confidence she could survive on her own in the wild, a visitor spotted Ollie crossing a walkway near the
bird house. Staff members quickly put out traps in that area. “She was watching us and waiting for us to walk away. She never came out to say ‘Hi.’ She was waiting to see what kind of goodies we left for her,” said the zoo’s Craig Saffoe. “She came in, she ate a couple of goodies and she left a lot of goodies sitting in the crate. She wasn’t starving.” The
zoo said Ollie appeared to be in good health but would get a full exam on Thursday. — Read it at
CBS News

Breaking with its 141-year history, the world’s top dog show will feature some sworn enemies:
cats! Forty cat breeds will take part in the
Westminster Kennel Club’s Meet & Compete showcase, which is designed to educate the public about different types of dogs and cats. Not to worry, the club’s communications director assures NPR that the dogs and cats will be kept apart, and that these show dogs and show
cats are all “well-behaved, well-trained,” and always under control anyway. Cats have played a role at the show before, but never at the Meet & Compete. The Westminster Dog Show starts on Feb. 11 in New York. — Read it at
NPR 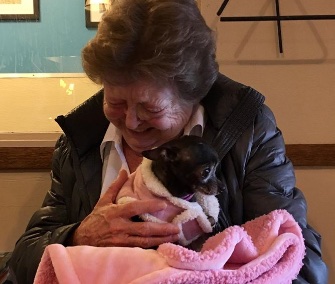 Minnie’s new owner is in love with the tiny pooch.

Jerri McCutcheon, 73, had an instant, emotional connection with a 10-year-old teacup
Chihuahua at a Montana shelter — and her delighted reaction to the dog was caught on camera. McCutcheon didn’t plan to get another dog after her last
dog, who she had for 11 years, passed away last spring. But her granddaughter was convinced McCutcheon needed another canine companion, and started searching for the right one to adopt. Clearly, she found the right one at the
Humane Society of Western Montana. Last week, McCutcheon met Minnie, and the
heartwarming photos of her holding the little
dog went viral. “This little girl is starved for love and I’ve got it to give,” McCutcheon said. — Read it from
GMA via Yahoo

Shrink-Wrapped Kitten Gets a Home

In December, we told you about a kitten who was
accidentally shrink-wrapped with a box by a warehouse machine and then shipped 500 miles before being found by a UPS driver in Memphis. He was only 5-to-7 weeks old at the time, and survived like that for four days. Now, there’s news that the deserving kitten has a happy home. He has a “great family that loves him and says he’s doing very well.” And the kitten first named Joey was renamed — Shrink. — Read it at Illinois’
WQAD